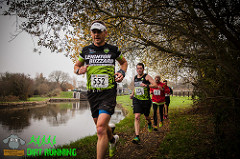 ### Training This was planned to be my last event of 2018, my first proper trail run and only two months after [the Loch Ness Marathon](https://www.reddit.com/r/running/comments/9ivxza/race_report_baxters_loch_ness_marathon_an_amazing) I was pretty confident that if I just kept up my normal weekly runs, putting some focus on hill climbs nearer to the date I’d be able to enjoy this one. ### Pre-race I’d read that the “Challenge” in the name was down to a 240ft climb around half way (mile 6) which lasts for a mile, I didn’t want to have to walk any part of this race so the plan was to hold off slightly to give me enough juice to run the whole climb non-stop, then push in the second half. The race starts and finishes at a school so there’s plenty of parking in the grounds (and they opened up a tennis court for more cars), one tip is there are toilets scattered around the grounds so you can avoid the queues at the Race HQ toilets. ### Race We all assembled at the start, I was five minutes early and hoped to get further forward before the start but they started the race a couple of minutes before the scheduled start time of 1000 which took everyone by surprise (there were still people heading over from the Race HQ building) as we all set off. One lap around the sports field then through a gap in the fence. The first six miles are along the canal, it can be quite narrow in places along the towpath so there’s a reasonable amount of congestion early on from where I started. One downside of the narrow tow path is that everyone seems overly aware of people trying to overtake, even if you’re just settling into a rhythm near someone, they’ll be frequently checking over their shoulder or moving aside to see if you’re trying to overtake so spent a lot of time backing off or or telling people I wasn’t trying to overtake which was a little frustrating. At mile six the course peels off to the start of the climb; a dirt road which climbs up to a wood at the top of the hill. I managed this non-stop and felt great at the top of having done so, time to speed up for the second half. The section of the course through the pine forest is stunning (check my photos on strava), an undulating path through beautiful woodland, the sun shining through the trees and occasional breaks in the trees give views across the valley and the canal we’d just headed along. Not much opportunity to overtake as the path frequently narrows through gates, holly bushes or brambles. Quite a few people deciding to stop or slow to a walk at these points, and then when the path opens up again it was a mad rush as everyone tries to overtake. I did as best as I could but could’t really start to push until we got back to the canal around mile 10. I had no idea how I’d do in my first trail half marathon, my road half marathon PB is 1:43 so I was hoping to at least came in under two hours. I was happy to cross the finish in 1:53 but felt I had a lot more left in the tank at the end. Overall a really well organised run over a great route. I’ll definitely be back again next year but will make sure I start further forward this time and not hold back as much in the first half as I didn’t find the hill too scary at all. ### What's next? This is a really great local(ish) trail run for me so I’ll definitely be entering for 2019. I’m going to hospital tomorrow for a hernia operation so will have a few weeks of recovery until I can run again but hope to get back into the swing of things as soon as I can. My running frequency and quality has improved considerably this year despite a few set backs so hope to build on this in 2019. So far I’ve entered the [Milton Keynes Marathon](http://mkmarathon.com) in May and have my first ultra, the [Race To the Stones](https://www.racetothestones.com) (100km non-stop) in July.