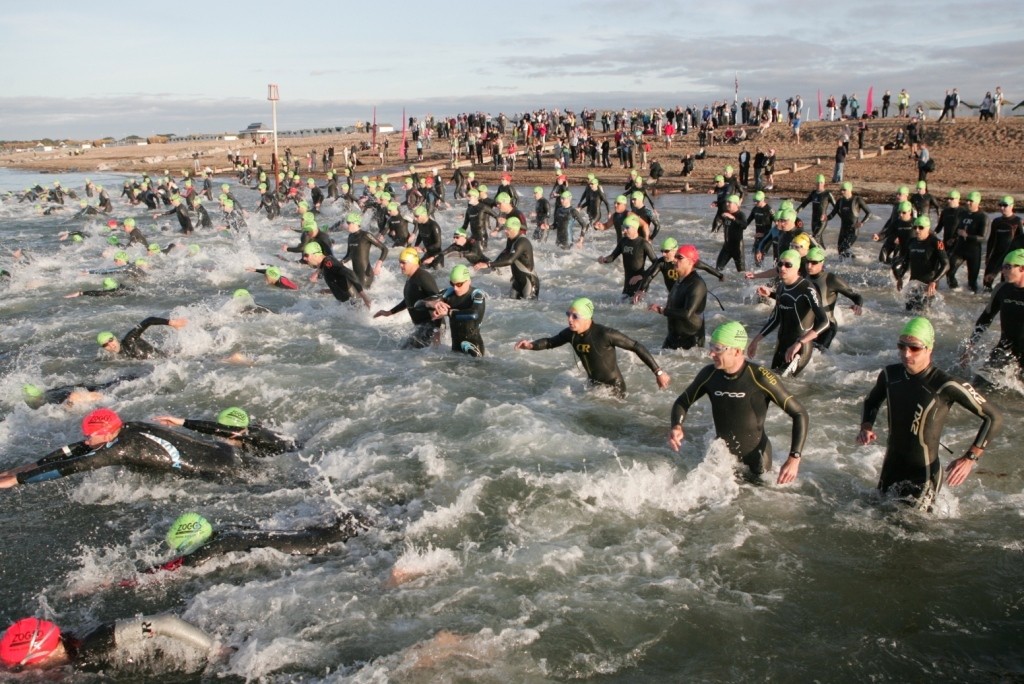 Worthing Standard Triathlon as Olympic distance was probably not a great one to pick as a first attempt. I do like a challenge so arriving on the morning to see the most choppiest waves this was going to be interesting! Transition was a good size and very organised with bikes placed into your Coloured wave section. Racking up It then dawned on me the quality of the competitors! My poor little Tarmac was over shadowed by shiny Cervelò and Trek TT bikes, the GBR Tri Suits were slowly being covered over as Wetsuits were pulled on and by the buzzing in the air of anxious anticipation was really pulling the atmosphere together this was an ÉTU Age Group Qualifier.
Called by your coloured Wave the Sprints went of first.. I was still in line at the toilets, only 6 for more then 500 people when will they ever get this sorted at events!
I made it up to start line just in time with minutes to spare pulling wetsuit on & trying not to look out to Sea!
Now I've had plenty of practice in the Sea ( I'm a local) however this was not the case this morning ..sadly I was thrown by what felt like a 6 ft wave against the first Buoy which shook me up a lot and unfortunately for me a ride in the Speedboat with the Lifeguards is how I finished my Swim! ( I wasn't the only one a few were pulled or sea sick)
Please don't let this put you off as plenty of other competitors made it round the 1.5km swim and I praise them!
After I composed myself I was seen by medics for risk of secondary drowning however I wasn't defeated. The kind Organisers /Marshals allowed me to continue with bike and run just not as a competitor so I completed what was a lovely undulating 40km bike ( a PB!) ride and a very wet & windy run along the Seafront and wore my lovely T Shirt as my condolence Prize!
It's a shame it all ended in horrendous downpours & torrential rain so no finishing picnic on the beach after with an Ice Cream..that is our Beautiful English Weather for you!

I would like to commend and Thank the Marshalls at Raw Energy Pursuits for a fantastic organised Event.