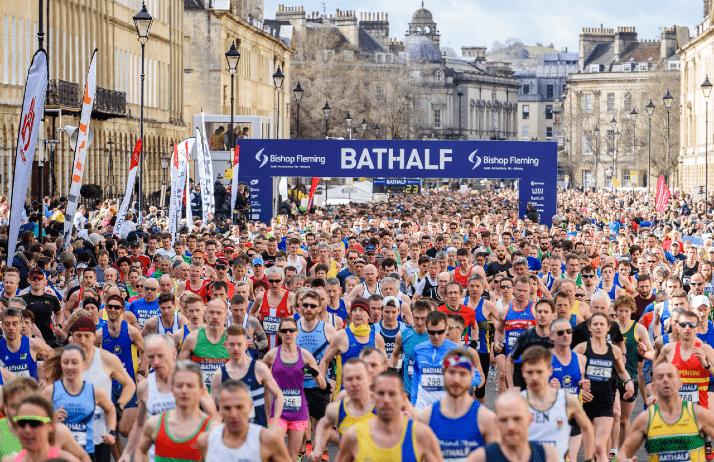 The race village was located next to Bath rugby club Marquees were in place on the grass area for the various charity runners and bag drop, etc

There was a call for runners to make their way to the start areas/pens. Following the signs corresponding with your bib colour led you to your starting pen. These were on a few side roads near to the main broad starting and finishing road.

Several runners were keeping the fun in the run by dressing up. A unicorn, Pacman, Scooby-Doo, elephants, teddy bears, a butterfly, a shoe, and a group of runners carrying a bodied stretcher raising money for Cystic Fibrosis, to name a few.

Although the race was listed as flat, the route had a couple of minor slopes to contend with. But, nothing that would stop you in your tracks and force you to walk. A small incline lead to Queens Square, which was full of supporters and some of the charity support teams.

Along the route, several bands were playing. I believe there was a ‘battle of the bands’ competition taking place. The music was brilliant.

The water stations were manned with plenty of volunteers. They handed out paper cups instead of plastic ones filled with water. This was in line with Bath Half trying to make the event plastic free.

It was a terrific experience with an superb atmosphere and would definately do it again.

You can read my full blog review at http://runiversityoflife.com/the-bath-half/