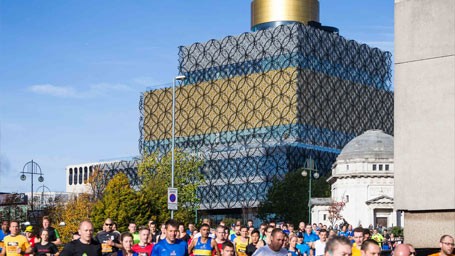 I have run the HM on many occasions previously including on my 50th birthday in 2010. This year was a new route, the race starting in Broad Street and finishing near to Millennium Point and Aston University. The route wasn't quite a reverse of the previous route but it did mean that the old killer hill at 11 miles was now a down hill early on in the run. The route is undulating but with an end point lower that the start which meant for a fast run. The weather was awful on the day, with rain non stop but this did not dampen (sorry!) the enthusiasm of the runners or the fantastic spectators! I would recommend this run, many people got PB's, I didn't but was faster by 8 mins than my last run here in 2016, my wife got a PB which has rekindled her love of Half Marathons so much so we entered next year on the following day! A must race for your HM calendar!