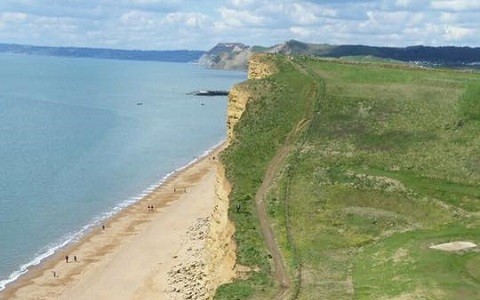 Team Tubb headed to the Jurassic Coast for the first event of our season.  When we signed up, it sounded to good to be true, a chace to run on the Jurassic Coast a World Heritage Site, fish and chips at the end and glorious views.

Heading to the start, the sat nav was required early due to the rolling fog making visibilty really difficult. Unfortunatley we were not able to easily find the race venue. We had actually driven past it before we realised where we needed to go.  The only two signs directing us towards race HQ was rather small. Once on site we were directed to the car park with ease. There was plenty of room for everyone and spectators were able to come and go with out any distruption to the event. There were plenty of signs directing people to the various points required before the race. The collection of the race number was easy.  With only four toilets for 500 runners there seemed to be a bit a wait but people were all in good spirits.

The race briefing was good, although it could have been more specific in terms of directions for those running different routes. The half marathon was two loops of the 10k course, and from what we could see some runners did appear to get a bit lost. There were a good amount of marshalls on route and red flags marked the route.

The course itself was certainly a challenge, plenty of ups and downs to test the muscles.The run down on to West Bay would have been epic with amazing sceneray had it not been for the sea fog.

At the end the Dinsour medal which was also bottle opener was a nice little added extra.

This was run by a small group of volunteers, there were no timing chips so it was more about the experience and enjoying the scenery, rather than getting a PB.