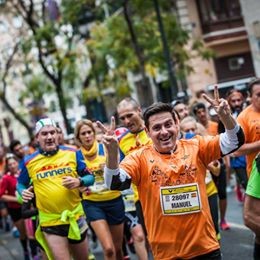 As my first marathon abroad, I couldn't have asked for more. Sunshine in November, a beautiful city with a nice contrast between new and old and a new marathon PB to cap it all off.

We arrived in Valencia on the Saturday morning after a silly o'clock flight from Gatwick and headed straight to the expo. Transport from the airport in to the city was easy on the metro.

The Expo was at the "City of Arts & Sciences" which also doubled up as the start / finish area on race day. I quite liked this as it meant we knew exactly where we had to be on Sunday morning. The expo itself was pretty standard. We were there in the peak hours around midday on the Saturday but didn't really have to queue long to pick up our race packs and a pre-race goody bag which contained a selection of snacks, an Amstel Radler and a variety of toiletry / cosmetic products which we didn't really know what they were! You also got your finisher's t-shirt at the Expo which looks nice but to be honest I am not overly impressed by the quality.

After picking everything up we sat in the grandstand overlooking the finish line for a while and enjoyed our Amstel's in the sunshine. There was a paella party where runners could get free food and drink but the queue for that was pretty big so as we'd been on the go since 4am we gave it a miss and headed to our hotel to get our feet up.

On Sunday morning we got on a free bus down to the start line nice and early. Bag drop was painless (as was collection later) so it was time for a pre-race wee and then into the start pens. Note about the toilets... The portaloos immediately by the bag drop had huge queues, but there were lots of other strategically positioned loos on all of the side streets leading to the start pens so I never had to queue for the loo at all.

The start pens were all in a long straight road leading up to the start line. I was in the purple pen which was the 4th one I think (for sub 3h30 runners). We got in at least 30 minutes before the start and it was already busy. People were trying to get into pens that they weren't allocated to but the marshalls did a reasonable job of seeing them off. Although a few cheeky buggers created a gap in the fence so loads of people piled in to our pen before other runners closed the gap.

Now to the actual race. It only took a couple of minutes to get across the start line and although there were ~20k runners it wasn't too difficult to get into your stride.

The first half of the race went out to the east by the harbour and had quite a few out and back stretches which whilst not being the most exciting were still fine as they were on nice wide tree lined boulevards. At around the halfway point you ran back past the harbour and went pretty close to the start finish area before then heading into the city centre. For me, this is where the race really came to life. The first half had plenty of support and "animations" as the orgnaisers called them, but once into the city centre the support was a lot greater. As I write this a few days later I can still hear the constant "VAMOS!!" and "CAMPIONES!" ringing in my ears.

The sights in the city section were nice including the main football stadium along with more traditional buildings like the Serran Towers and Town Hall.

A quick note about the aid stations before I move on to the finale... Quite simply they were brilliant. Water (in bottles) and gatorade every 5km. Gels at 20km and 30km (which I didn't use) and then fruit and other snacks every 5KM during the 2nd half. There were also support people at various points throughout the course with vaseline and some sort of magic spray that people were putting on their aching muscles.

Back to the race... With about 5 km to go things got very busy and the noise just got lounder and louder. At times this caused a problem as there weren't any barriers keeping people off the course so spectatros were standing on the road making it narrow in places. The marshalls were trying to keep them back but it was a thankless task. No real dramas but I was pushing hard at this point to hit my target and did have to yell a couple of times to get people to stand back.

The last couple of KMs were pretty special. You could see the City of Arts and Sciences looming large. With about 800m you drop down off the road on a ramp which was tough on tired legs but then you get on to the finish straight which is actually built onto water in between 2 big grandstands. The finish had an amazing atmosphere with music and a very enthusiastic MC.

Once over the line there was a nice big area where runners could gather themselves and pick up their bling and finishers bag (fruit, nuts, water, powerade and a towel). I really enjoyed just hanging out in this area whilst waiting for my friend to finish. There was nobody rushing you along and you could probably have statyed there as long as you liked. The endless supply of Amstel Radler didn;t do any harm either  :)

All that was left at this point was to collect our bags and to go and get my medal engraved which cost €5 and only took about 10 minutes of queuing so well worth it. Then it was time to head into the city to start celebrating.

So in summary, I would 100% recommend the Valencia Marathon to anyone who is thinking about running abroad and fancies a bit of late November sunshine (it got up to about 20 degrees but I never felt uncomfortable because of the heat). The course is pancake flat and definitely a good one for PB-chasers. The organisation was excellent and you get a very nice piece of bling at the end. Even with a couple of small gripes as noted above this was definitely a 5/5 race for me.

What are you waiting for... Get yourself signed up for 2018!