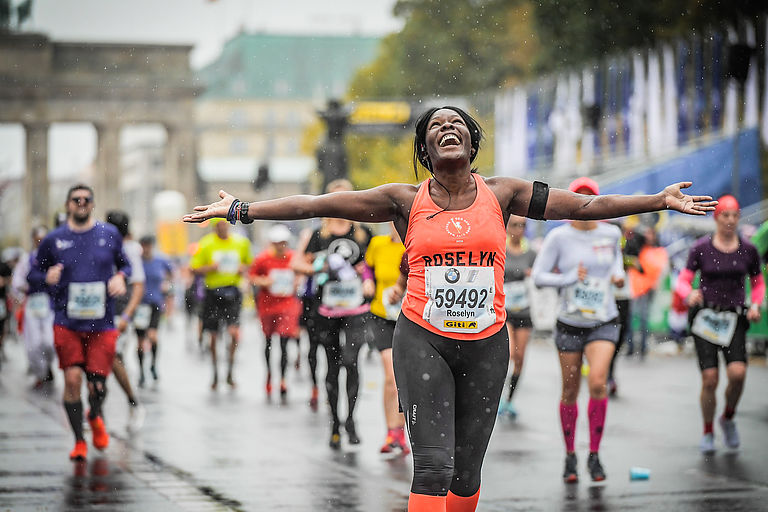 The Berlin Marathon is one of Europe's favourite marathons. Also, rated as one of the 6 Masters, it is a race in which many are keen to participate. With 40,000 runners and crowds described as "superb" and "phenomenal", the race through one of Europe's most vibrant capitals is a joy for both participants and spectators alike. It is also where the current marathon world record was set by Dennis Kimetto.Berlin Marathon Route If you want to see lots of historic sites while running the Berlin Marathon will be a definite joy. The Berlin Marathon is a 26-mile loop. This loop starts and ends at one of Berlin's most outstanding monuments - the Brandenburg Gate. After the runners set off they will pass the Reichstag, at the 6 km point. They will then pass other various famous buildings and monuments such as the Fernsehturm (Berlin Television Tower), Rathaus Schoenberg (in front of which JFK gave his speach proclaiming "Ich bin ein Berliner") and the Konzerthaus Berlin. Next, the course turns west then northwards. Runners pass along the Ku'damm shopping boulevard to Olivaer Platz. They then continue up the Kurfuerstendamm, where, at kilometer 34, the Kaiser Wilhelm Memorial Church is visible and the course turns into the Tauentzienstrasse, taking runners past Berlin's premier department store KaDeWe on Wittenbergplatz. Not far to go now. After Nollendorfplatz, home of the gay community, runners carry on towards Potsdamer Strasse and then Potsdamer Platz, crossing the line of the Berlin Wall. Then into the Leipziger Strasse, before the Spreeinsel. Here runners can see the ruins of Erich Honecker's Palast der Republik as well as the ex-GDR State Council Building before arriving at Unter den Linden, Berlin's monumental boulevard. From there runners will see the end in sight and make their final efforts towards the finish line at the Brandenburg Gate.


What athletes are saying

The characteristics which best describe Berlin Marathon, as voted on by past participants.

Below are the top three aspects of the Berlin Marathon, as determined by athlete reviews.

Ask a question below to get advice from the community and the team.

Great event.  Flat and fast course, covering the sights of the city.  Great medal to show for it

My 2nd major marathon after running Berlin in 2018. With that being the case it's quite easy to make comparisons between the two. I think the organisation was good overall, it's always difficult to arrange the massive amount of people that enter an event like this. The st...Read full review

Have you recently completed the Berlin Marathon event?

Ask a question below to get advice from the community and the team. Choose the relevant topic to help get answers faster.